The play, entitled "Why?", can be seen on 12th and 13th October at La Vega Former Arms Factory (Oviedo) 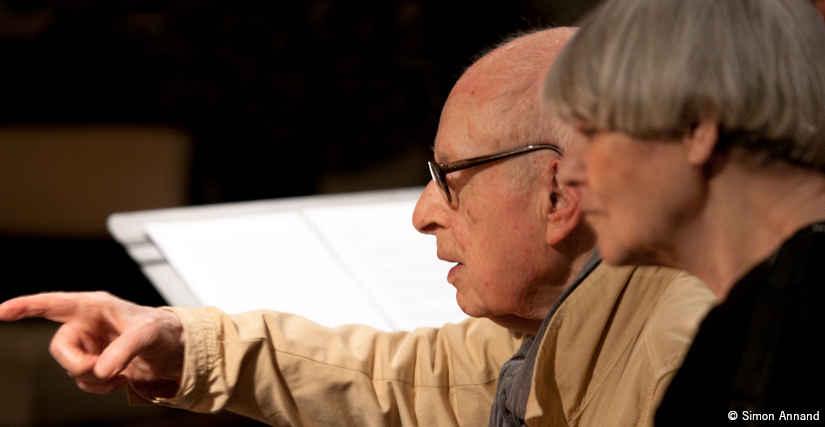 
The Princess of Asturias Foundation is to sponsor the premiere in Spain of Why?, the latest play by British theatre director Peter Brook, 2019 Princess of Asturias Laureate for the Arts, within the framework of the cultural programme organized to mark the Awards Ceremony.

Starting out from the concept coined by Peter Brook of “empty space”, the Foundation has adapted a unique venue, namely the workshops of the La Vega Former Arms Factory in Oviedo, to create an ephemeral theatre that will host this representation on 12th and 13th October. The play will be in English with Spanish subtitles.

Written and directed by Peter Brook in collaboration with Marie-Hélène Estienne, Why? is a reflection on the theatre and fundamental questions of existence: Why theatre? What is it for? What is it about? Actors Kathryn Hunter, Hayley Carmichael and Marcello Magni, accompanied by pianist Laurie Rees Blundell, will guide the viewer through this journey that merges comedy with drama.

The play was first premiered on 19th June at Les Bouffes du Nord Theatre in Paris, following which it was staged in New York. After its presentation in Oviedo, the company will continue its international tour of venues in Taiwan, China, Russia, Switzerland, Italy, Spain, Colombia and France. Why? can be seen at the Teatro Principal Antzokia in Vitoria on 7th and 8th November, and at the Centro Dramático Nacional in Madrid from 28th November to 1st December.

OTHER EVENTS FOCUSING ON PETER BROOK

The Foundation has also organized other activities related to the figure of Peter Brook, which will be held at different locations

Meeting with the Public

Peter Brook will take part in a meeting with the public which will review his life and career. The event, which will be chaired by actor Antonio Gil, will take place on 15th October at the Palacio Valdés Theatre in Aviles.

The recipient of the Princess of Asturias Award for the Arts will attend a tribute featuring students from Spain’s Schools of Dramatic Arts (ESAD) on 16th October at La Vega Former Arms Factory in Oviedo.

Antonio Gil and César Sarachu, two actors who have studied with Peter Brook, will each give a masterclass (on 14th and 15th October, respectively) to which ESAD students have been invited. The classes, which aim to bring participants closer to the creative process of the British teacher, will be held at La Vega Former Arms Factory in Oviedo and at the School of Dramatic Arts of Asturias, in Gijón.

This year, the “Awards Week” programme is to include the screening of a selection of films related to the work and careers of the 2019 Princess of Asturias Laureates. The screenings will take place at La Vega Former Arms Factory between 10th and 18th October.

The film cycle will include five of the films directed by Peter Brook throughout his career: The Lord of the Flies (1963), Marat/Sade (1967), Tell Me Lies (1968), King Lear (1971) and Meetings with Remarkable Men (1979). The documentary entitled The Tightrope. A Theatrical Adventure with Peter Brook (2012) will also be screened.

These activities form part of “Awards Week”, a cultural programme designed by the Foundation that includes the participation of the Princess of Asturias Laureates in a variety of activities during the days leading up to the Awards Ceremony at the Campoamor Theatre.

Since 1996, the Foundation has scheduled different activities in diverse locations in Asturias aimed at making the Laureates and their contributions to the world of science, culture or any other field in which they work better known to society at large.

Access to all “Awards Week” events is free.  The Foundation will announce the complete programme of activities in the coming days, as well as the procedure for obtaining tickets.