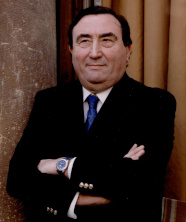 Graciano García was born in Moreda (Asturias) on 12th October, 1939. He holds a degree from the Official Journalism School of Madrid and has been Director of the Prince of Asturias Foundation since its establishment until December 2009, when he was appointed Director Emeritus. In 2015, he received the Foundation’s Emeritus Trustee insignia from the hands of TM King Felipe and Queen Letizia.

Graciano García has been the promoter of pioneering cultural and journalistic enterprises in Asturias engaged in the struggle for freedom.

In 1961 he began his professional career at "La Nueva España" newspaper of Oviedo, while collaborating with diverse national publications. On 24th May 1969 he founded the "Asturias Semanal" magazine, which became a vehicle for expressing the voice of democratic sentiment in Asturias, which he directed from its beginnings until 1977. In 1978 he was promoter and director of "Asturias Diario Regional" newspaper, where he remained until 26th June 1979.

In 1989 he founded Ediciones Nobel, which has published works of great value and cultural richness since its inception. Currently focused on European and Latin American markets, Nobel has offices in several countries. Due to his initiative, 1996 saw the creation of the literary magazine Clarín, one of the most important in this speciality, and recipient of the “Jovellanos” International Essay Award, one of the most prestigious Spanish-language prizes, which is granted annually since 1994. The aim of this award is to distinguish original, unpublished works which make a significant contribution to the fields of thinking, the humanities or social and natural sciences by authors from any country. The award was instituted on the 250th anniversary of the birth of Gaspar Melchor de Jovellanos. Furthermore, on the occasion of the 20th anniversary of this award, Graciano García fostered the creation of the “Jovellanos International Poetry Prize. The World’s Best Poem”.

On 24th September 1980, with the backing of the Royal Household and in the presence of TM King Juan Carlos and Queen Sofía and the then Prince of Asturias, Graciano García launched his idea of creating –together with a group of fellow Asturians and particularly with the aid of the then Secretary General of the Household of HM The King, Spanish General Sabino Fernández Campo, Count of Latores– a foundation called the Prince of Asturias Foundation (the Princess of Asturias Foundation since October 2014). The essential aims of the Foundation are to consolidate the existing links between the Principality of Asturias and title traditionally held by the heirs to the Crown of Spain and contribute to extolling and promoting those scientific, cultural and humanistic values that form part of the universal heritage of humanity. Since 1981, the Foundation has bestowed the Prince of Asturias Awards (Princess of Asturias Awards since October 2014) to symbolize its goals and nature. These awards are aimed at rewarding the scientific, technical, cultural, social and humanitarian work carried out at an international level by individuals, groups or institutions world-wide, with priority being given to those nations belonging to the Ibero-American community.

Graciano Garcia was given the Great Cross of the Royal Order of Carlos III, the highest civil condecoration in Spain, which he was awarded in 2010 by His Majesty King Juan Carlos. In 1984 he was awarded the Order of Civil Merit by H.M. King Juan Carlos. He was given the keys to the city of Oviedo in 1995, having already been named Asturian Person of the Year by the local and regional newspaper, La Nueva España, in 1981. He was made Knight Commander of the Orden de Río Branco by the government of Brazil in 2004. In September 2005 the Government of the Principality of Asturias awarded him the Autonomous Region's highest honour, the Gold Medal of Asturias. This award is conferred on rare occasions and has been bestowed on such public figures as the then Prince of Asturias, scientists Severo Ochoa and Grande Covián and Sabino Fernández Campo, the Count of Latores.

In September 2006 he was given the Medal for Police Merit by the Spanish Ministry for Justice and Home Affairs. The Avilés city council awarded him the city's Gold Medal in October 2006 and in February 2007 he was named Honorary Citizen of Aller by the Aller Town Council. That same year, the Spanish Ministry of Foreign Affairs and Cooperation's Diplomatic School awarded him both the Carlos III Medal, its highest honour, and a Gold Medal. He was also awarded a Gold Medal by the Veterinaries' Association of the Principality of Asturias, as well as the Cross of the Order of Merit of the Civil Guard with a white ribbon. In 2008, the International School of Protocol awarded him its Gold Medal and he was also bestowed with the Dionisio de la Huerta Casagrán Award, in its first edition, ex aequo with Sabino Fernández Campo. In 2010, he was named Honorary Journalist by the Press Association of Oviedo. On the same year, he was also bestowed with the International ASICOM-University of Oviedo Award for his Professional Career and became the first journalist to be awarded the “E” for Europe by the European Journalists Association. Among other distinctions, Graciano has also received the "Manzana de Oro" (Golden Apple) from the Asturian Centre of Madrid in 1996, the Businessman and Professional of the Year Award, from Astur Manager (2000), Puerta de Asturias (2000), Master de Oro, from the Forum for Top Management (2002), Madreña de Oro, from the Asturian Centre of Seville (2002) and Faba de Oro (2004). In July 2021, the editorial board of El Comercio newspaper unanimously agreed to grant him the El Comercio Award for promoting the image of Asturias. the minutes of the meeting underscore “Graciano García’s extraordinary contribution to our region as the founder and promoter of an institution that has become an international benchmark”, among other merits.

Graciano García was married on 10th October 1970 to María Josefa Cervero (†), with whom he has two children.