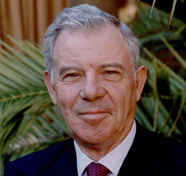 President of the Prince of Asturias Foundation from 1996 to 2008, he is currently Emeritus Trustee of The Foundation and chairman of the board of Peugeot Spain and Sanitas.

He holds a PhD in Economics and a Law Degree from Madrid’s Complutense University. He also has a degree in trade and accounting from Gijon Trade School. He joined the State Corps of Commercial Technicians and Economists in 1964 and has held the post of university professor since 1973.

He is a former governor of the Bank of España (1978-84), Secretary of State for Economy (1977-78), technical secretary and undersecretary of the Treasury (1973-76) and head of Development Plan Studies (1970-73). Within the private sector, he has been chairman of Aceralia and Banco Zaragozano.

In the Asturian business world, he has been chairman of the Juliana Constructora Gijonesa shipyards and a member of the boards of Uninsa, Ensidesa and Hunosa. He was the first chairman of the Principality of Asturias Foundation for Technical and Scientific Research (FICYT) and is a trustee of several foundations. He currently sits on the boards of Asturiana de Zinc, ArcelorMittal Spain and Generali Spain.

He was president of the Prince of Asturias Foundation from 1996 to 2008.