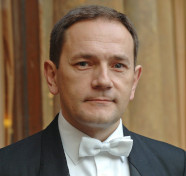 José Esteban García Miranda, began his studies under maestro Angel Embil, and went on to the University Conservatory of Music in Oviedo to study piano, harmony and composition.

He then moved to Madrid, and studied Orchestra Conducting at the University Conservatory under maestro Enrique García Asensio.

He combined his music studies with university studies in Oviedo, and has a degree from the this university in the History of Art.

In 1984 he was appointed vice-director of the Princess of Asturias Foundation Choirs.

In 1987 he set up the Foundation's Youth Choir under the auspices of the Music Department, and two years later (1989) was appointed incumbent director of the Princess of Asturias Foundation Choir.

Whilst completing his academic training he has taken part in numerous conducting courses, both nationally and internationally, as well as in other music meetings: Lerida's International Music Courses, Bruges' Choir Conducting Courses (Belgium), Orchestra Conducting Courses under maestros Pierre Cao and Aldo Ceccato, the World Choral Music Congress (Stockholm) and others.

Under his directorship the Princess of Asturias Foundation's Choir has worked intensively on preparing a repertoire ranging from the Baroque to the present day and including works such as Bach's 'Passion According to Saint Matthew', Mozart's 'Mass in C minor' and 'Requiem', Brahms' 'Eine Deutsche Réquiem', Rossini's 'Stabat Mater', and Beethoven's 'Ninth Symphony' alongside premieres of Spanish composers.