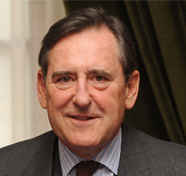 Chairman of Santander Universidades and vice-president of Universia, Matías Rodríguez Inciarte was born in Oviedo on 23rd March 1948. President of the Princess of Asturias Foundation from April 2008 to April 2018.

He holds a degree in Economics from Madrid’s Complutense University, earning a national prize for being the most outstanding graduate. He completed his business studies at Boston’s Massachusetts Institute of Technology (MIT).

Through a public completion in 1972 he joined the State’s Corps of Economists and Business Engineers, moving on to posts related to international commerce in business negotiations under the General Agreement on Tariffs and Trade (GATT) and later, as a trade adviser for the Spanish Embassy in Chile.

In 1980 he assumed the Secretaryship General of the Government’s Economic Vice-presidency and in 1981 he was appointed Secretary of State attached to the President. In 1981 he was named Minister of the Presidency.

In February 1984 he began his stint at Banco Santander, a firm where he was a member of its board (1988-2017), vice-president since (1994-2017) and a member of the Group’s Executive Committee until November 2017. He is currently chairman of Santander Universidades and vice-president of Universia.

He is also chairman of SANITAS, UCI and the Social Council of the Carlos III University, Madrid, as well as a director of Financiera El Corte Inglés, FIPONSA and BUPA. He has been vice-president of the Entrepreneurs Circle (Círculo de Empresarios).

In 1995 he joined the Princess of Asturias Foundation’s Board of Trustees.