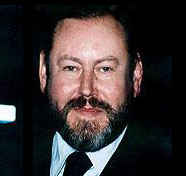 The first president of the Prince of Asturias Foundation, since its establishment and until 25th June 1987, Pedro Masaveu Peterson (Oviedo, 1938 – Madrid, 1993) was a financier and businessman.

His economic contribution and personal implication were decisive for the establishment and consolidation of this institution.

Member of one of the most prominent families in the Asturian industry and finances, he graduated in Law from the University of Oviedo. The Masaveu family arrived in Asturias in the mid 19th Century from Catalonia. Together with other renowned upper-middle class families, they carried out a decisive role in the industrialisation of Asturias. From his father, he inherited the management of the Banca Masaveu, as well as his family’s businesses in cement works, real state, finances and the agro-alimentary sector. Masaveu was also a member of Banesto´s Board of Directors and Vice-president of its industrial corporation; and adviser for Hidroeléctrica del Cantábrico.

Patron of the arts, Masaveu added 600 pieces to the significant private art gallery initiated by his father, which includes pieces by Berruguete, Ribera, Zurbarán, El Greco, Rubens and Goya. After his demise, his sister and only inheritor, María Cristina donated it to the Principality of Asturias, retaining his father’s private collection for the family. The pieces can be visited at the Museum of Fine Arts of Asturias, under the title “Pedro Masaveu Collection”.

In 1984, he was presented with the Great Cross for Civil Merit and, a year later, with the Order of St. Charles of the Government of Colombia.